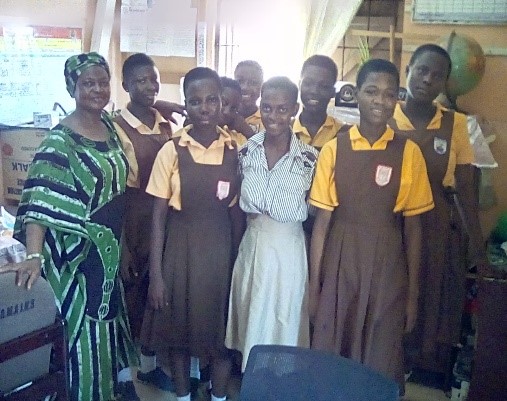 After Veronica Akanpani (third from right on front row-picture) lost her mum, her father left her with the grandmother and literally walked out of her life. Living with an old and frail grandmother meant Veronica had to hawk on the streets of Accra New Town (where she resides) to cater for herself and her grandmother. Now 16 years old, Veronica is now looking forward to taking her Basic Education Certificate Examination this year, thanks to CDI identifying and enrolling her onto the Exclusive Vulnerable Girls’ Education Project.

As is the norm, CDI with School authorities realized Veronica rarely came to school and when she did, she appeared tired and withdrawn. Her academic performance had dwindled and she couldn’t even pass subjects she once considered her “favorite”. CDI had to quickly move in to save the situation by having Project Officers visit Veronica and her grandmother at home. This was to assure her grandmother she wasn’t alone in catering for the needs of Veronica and to equally make her feel she and Veronica had a family they could turn to in times of need. After this meeting, Veronica was enrolled onto a specialized extra tuition classes to boost her performance and bring her back to her former glory. This came with the usual school bag, sanitary pad, learning materials amongst others. In the words of Veronica:

“The extra tuition you have organized and paid for has made me regain my confidence during normal classes and I have been promoted to JHS 3 because I passed all my exams in JHS 2. Without it, I would have been demoted as usual and would have had to leave this school because I couldn’t stand the shame of being demoted.” Veronica Akanpani

“after you came and spoke with my grandmother, she is now very hopeful and forces me to learn always, those days she didn’t care whether I studied or not, but now she is very much interested in my school life.”

With Veronica living within an impoverished slum community, she stated she had little hopes of ever taking her BECE examination, but thanks to CDI she is confident the sky is not even a limit as she dreams of becoming a medical doctor in the future. Accordingly, Veronica is now a lively person in class and contributes meaningfully during lessons as indicated by her teachers. What is more? she is now in school every other day and hasn’t missed a day of her class ever since CDI came into her life.