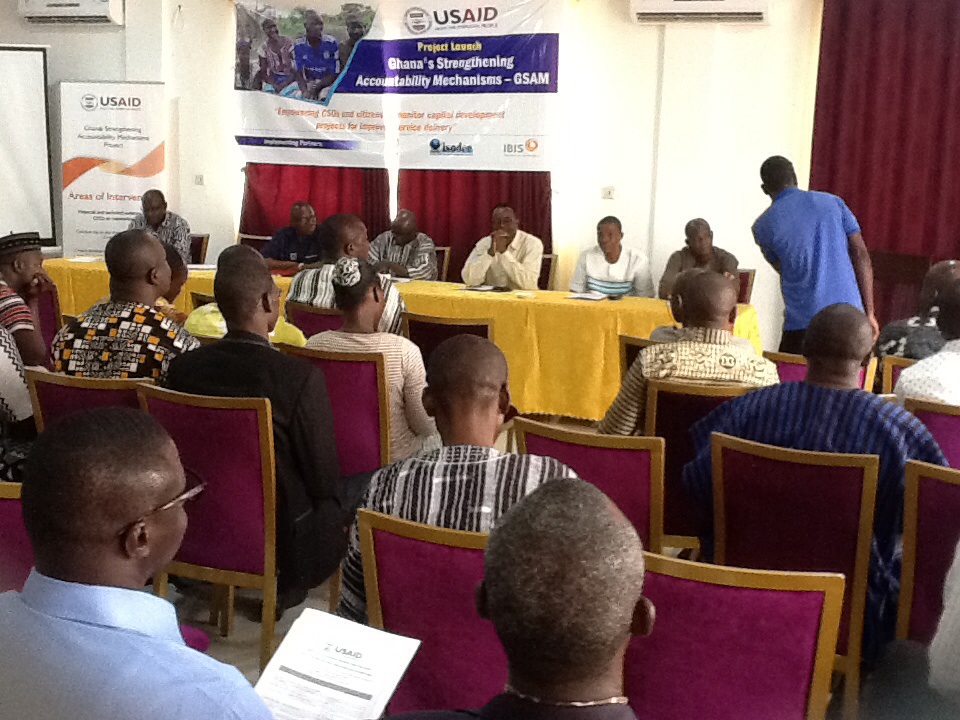 Ghana’s Strengthening Accountability Mechanisms project dubbed GSAM is a five (5) year USAID funded project, which focuses on strengthening citizens’ oversight of capital development projects to improve local government transparency, accountability and performance in 100 districts of Ghana. GSAM project is designed to strengthen social accountability by improving information to CSOs to enhance their capacity to demand accountability. To this end, the project was launched in the Upper West Region on the 20th of August 2015 at the Nouyong Empire Hotel located in Wa.

Center for Development Initiatives facilitated this launching. Three CSOs were invited to the launching and since IBIS does not have current operational presence in the Upper West Region, CDI, one of the invited CSO’s had to step in and organize all that was necessary to make the program a success. As part of the arrangement, Nouyong Empire Hotel was selected by CDI as the venue for the program. The team from IBIS-Ghana was led to the venue of the program upon arrival to assess the facility, which they later approved of. Several calls were also placed to the various District Coordinating Directors by CDI as a follow up so as to remind them of the program which they all honored on the launching day.

Bringing the crème de la crème of the local government structure in the Upper West Region to such a function was a tedious job to do but thanks to the cordial working relationship CDI has with most of the District Assemblies as well as the Regional Coordinating council.

To ensure smooth and sequential flow of the program, CDI on behalf of IBIS-Ghana contracted the services of Mr. James Kuusaana (Manager of W.fm) as the master of ceremony (M.C) who later agreed upon a request by CDI to transmit the program live on air though at a fee. CDI again chose the chairman for the program who turned out to be a former working colleague of the Country Director of IBIS- Ghana. In the welcome address of the country Director of IBIS, he eulogized the achievements of the chairman. He highlighted the enormous contributions the chairman made whiles in active service at the Upper West Regional Coordinating Council.

With all these in place the program (GSAM) took off successfully on the D-day. The project according to IBIS country Director was purposely developed to assist Government, through the Ministry of Local Government and Rural Development (MLGRD), to achieve the objectives of the Pillar 4 of the Government of Ghana’s “Better Ghana Agenda”, which outlines its mission to “ensure citizen-based monitoring and evaluation of public policies and programmes”.

The goal for the GSAM project is to strengthen citizen oversight of capital development projects to improve local government transparency, accountability and performance. The project seeks to improve accountability by enhancing mechanisms of bottom-up social accountability in MMDAs through increasing the quality and quantity of information available to citizens about the effectiveness of development projects funded by MMDAs capital budgets via extensive CSO monitoring, the production of scorecards, and public information campaigns that mobilize citizens to use the scorecards to demand improved development planning and execution.

The project accordingly is being implemented by a consortium of three organizations, made up of IBIS in Ghana, CARE International Ghana and ISODEC. IBIS in Ghana is responsible for the project in 40 districts spread around the three northern regions and Volta region. There are fourteen (14) participating district each in the Volta and Northern regions, and six (6) districts each in the Upper East and Upper West regions.

Unlike most social accountability projects, GSAM has a role for the Ghana Audit Service and their task will be to carry out comprehensive auditing on capital projects undertaken by various District Assemblies. To that end, issues of procurement, value for money, citizen’s participation among others will all be considered.